Beautiful, magnificent, dreamy, mysterious, picturesque and so much more are words that different visitors used to describe Hoan Kiem Lake, one of the best 5 places to visit in Hanoi. This destination has certainly left a mark in the memories of a thousand tourists from all over the world. However, if you have not yet visited Hoan Kiem Lake or want to know more about it, then stick with the post and learn all the interesting information about this location.

Things to Do in Hoan Kiem Lake

Even though Hoan Kiem Lake is by no means large in size, there are tons of sites and activities here. This destination will certainly not disappoint you during your travel to Vietnam.

The first thing that we recommend you is to stroll around the lake to contemplate the dreamy scene in the morning. Remember you can rent a Cyclo or electric car to travel, but it is not as enjoyable as walking. Morning is extremely peaceful and relaxing especially during weekends with green trees and grass patches surrounding the lake; the greenish water reflecting the rays of the sun and the light wind blowing on the streets. However, Besides the remarkable nature around Hoan Kiem Lake, tourists also enjoy seeing the lives of the people up-close. There will be a lot of people jogging, exercising, and sometimes even working out on the sidewalk in the morning.

The Local Exercising in the Morning

At night, Hoan Kiem Lake slowly turns from a tranquil location to a bustling, sparkling destination. At this time of the day, people start going out the street and enjoy their night after a hard-working day. Now, tourists will see Hoan Kiem Lake filled up with lights from buildings, motorbikes, cars, and decorations around famous sites and streets. If you want to experience the beauty of the modern world, then choosing Hoan Kiem Lake at night is exactly correct. During the weekends, bar and restaurant are allowed to open before midnight for any night owl.

There are two must-see locations in Hoan Kiem Lake, one is The Huc Bridge and the other is Ngoc Son Temple (Temple of the Jade Mountain). The Huc Bridge can be easily sighted with bright red color which connects the land with a small island. In the past, The Huc Bridge was very simple and had been reconstructed based on the former one. This impressive bridge is directed to the East where the sun rises every day and painted in red to represent the people’s desire for life and happiness.

» You may like: Hanoi Street Food Tour & Sightseeing By Motorbike «

On the other hand, Temple of the Jade Mountain is a grand structure showing the ancient Vietnamese architecture. You will have to cross The Huc bridge in order to reach Ngoc Son Temple built to worshiped Wenchang Wang, a Taoist deity, and Tran Hung Dao, who achieved the incredible feat of defeating three Mongol invasions in the 13th century, and other significant figures of Taoist, Confucianism, and Buddhism. The unique beauty lies in the harmony between Heaven and Earth; between temple and lake; human and nature.

Finally, you can visit the Thang Long Water Puppetry Theatre to watch the genuine Vietnamese water puppetry show. Here, the staffs will show you various scenes of ancient Vietnam, including the daily lives, festivals, and the legend of Hoan Kiem Lake. Through the magical hands of the puppeteers, tourists will be surprised at the realistic and lively puppet show. 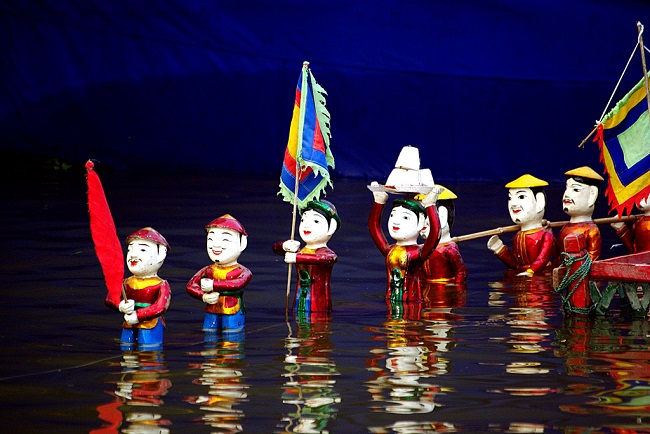 A Scene from the Show

Legend of the Lake

Long ago, when Minh Dynasty invaded Dai Viet(Vietnam), General Le Loi raised an army and fight with the neighbor country. However, facing the out-numbered army, Le Loi had not yet successfully pushed back the invaders. One day, when he visited his close friend Le Than, and suddenly bright rays shined in the corner of the house. It turned out that Le Than when he was a fisherman caught a bar of metal and kept it in his house. Le Loi took the bar and saw the words “Heaven’s Will” carved on the sword. Knowing it was a sacred sword, Le Than offered it to the General and from that point, Le Loi fought with the sword and won battle to battle.

Statue of King Le Loi and the Turtle God

After successfully defeated Minh’s army Le Loi, now was the king, set sail to Ta Vong Lake with his generals. Unexpectedly, a giant turtle emerged from the water and asked the king to give back the sacred sword. At that moment, everyone realized that the Dragon God had given Le Loi the treasure to battle Minh Dynasty and wanted to take it back after the war. King Le Loi took out his sword and gave it to the Turtle God.

Afterward, in order to remind people of this event, Le Loi renamed Ta Vong Lake to Hoan Kiem Lake and the legend continues to be told until this day.

Excursion Vietnam hopes that you've already got some essential information about Hoan Kiem Lake. To learn more about the lake as well as other beautiful sites in Hanoi, feel free to join our Hanoi City Tour Full Day